I completed an art piece today. I cannot remember the time when I actually took the day off from other duties to simply make art. I might say that I am not an artist. Yet, in a way everyone is. We create a meal, a mood, a moment, a motion, a monologue. What I realized is that it is the craft that is the practicing artist's distinguishing feature. Everything is in the execution. 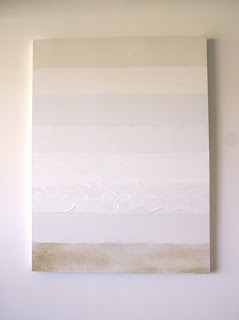 This piece was originally simply going to be ten indiscernible shades of white. I have many whites left from various household renovations and so liked the idea of a canvas that simply took light or angle or concentration to reveal itself. With the large blank wall that I have to fill, the effect would have been even more pronounced. Of course, in the crafting of the piece something else happened ...
I began to recall my favourite beach of over twenty years. Discernment of difference led to eight divisions ... as beach, shore, breakers, waves, froth, mist, ether, spirit ~ began evoking the textures of each. Colours on canvas reflect different lights and paint has a will of its own. My abstract art becomes a realist interpretation. The cosmos has a little laugh at me and my intentions.

We are all waiting for white, the formlessness of form, the union with Union, the one with Oneness, ... and it simply will not manifest in less. Instead, simply more intimacy with the ever-increasing evolutionary beauty appears. Eight shades of white on a white canvas and what appears - ... the all of everything.

And .. that, I suppose is the conclusion. We expect that we draw from inspiration neutrally. The place that it comes from is without presupposition. Yet, if even for a moment, we believe our entire somatic and energetic memory does not influence all we see and imagine, beginning at the point in time immediately after the pure invocation of conception in projection ... all we have to do is look to find ourselves in the most whitest and blankest of forms,